Though they knew each other and shared a few dances in their early years, Pam and Hunter in the Lakeside Building really connected in 2007 when Hunter’s curiosity about Pam while visiting a friend in the hospital turned into a long-awaited and fated dinner date.

He had deep Croatian roots and was raised by a single mother who enrolled him in Russian ballet during grade school. She was the first woman to earn a stock broker’s license in Washington State. He was a career public servant, serving in the Army for twenty-five years and providing aerial coverage for an elite group of military problem solvers along the way. She was nearly killed by a reckless driver who barreled into her stopped car at seventy-seven miles per hour. That experience turned the savvy financier and business woman into a chaplain. Hunter reports that being drawn to a strong woman was a “no-brainer.” “I knew she was smart and I knew you didn’t get ahead by going out with dumb gals.”

While living in Redmond and researching retirement living, the Hearthstone, with its down to earth and welcoming resident population was the perfect choice for Hunter and Pam.  Having spent their respective youths in the Green Lake area, he playing baseball on the same field that still sits near the lake today and both of them swimming in the lake, it’s no surprise their path took them back to the place where they spent their formative years. Today, together they have six great grandchildren, nineteen grandchildren and nine children. Hunter serves as the community’s Bingo commissioner and Pam leads the community’s weekly cyber fellowships.

Hope on a RopeCommunity News 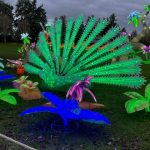